Formation of the BEC

Following the demise of both the Bedford Gathering and the Bedford Owners Club there has been a void in the world of Bedford enthusiasts. There have been some attempts over the years to cater for the owners and enthusiasts of this famous commercial vehicle manufacturer, but for various reasons these have been unsuccessful.

With this in mind, Christine Thomas & David Beckett, who are owners and preservationists in their own right and members of the Griffin Trust, arranged a Gathering of Bedford vehicles. This was held at the Vauxhall Motors Sports and Social Club Ellesmere Port site, in June 2013. They invited various people with an interest and passion for Bedford vehicles to attend.

An open meeting was held in the concert room of the club on the Sunday morning. Following a number of presentations and debates, it was decided that there was sufficient interest to form a new club and the Bedford Enthusiasts Club came into being. A committee was formed from those who were present at that meeting. 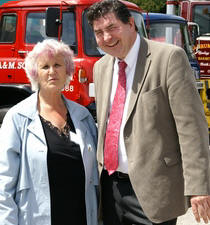 The Bedford Enthusiast Club are very grateful to the various benefactors who have made financial donations allowing the club to be set up and we would like to thank them here. This list is in no particular order:

Recent Donations to the Club:

Our thanks go to: